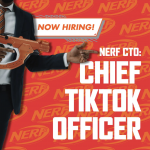 Nerf recently upped their social media game by running a campaign on TikTok searching for their new Chief TikTok officer, essentially the person who will act as the Nerf spokesperson and brand ambassador on the platform. The search alone helped the company gain 42,000 followers on TikTok (they had 22,000 before the campaign and now have well over 100,000 followers) and they received 1,000 applications for the role. The #NerfApplication content has been viewed more than 90 million times. We’ve done a check-up on Nerf’s campaign by applying our 5-Step Rx for marketing well.

Step 1: Use meaningful language
Nerf’s spokesperson search was simple. They chose a title: Chief TikTok Officer, and they spread the word on TikTok and Instagram promising $10,000 a month for a three-month stint as the main content creator for the Hasbro toy brand. The application process was simple, too: create a TikTok video explaining why you should be the new Chief TikTok Officer and use the hashtag #NerfApplication.

“Chief TikTok Officer” is special and important because it’s specific and gives the winner a fancy—yet simple—title. Plus, they were fishing where they fish are and rather than doing all the talking, they engaged a sea full of potential ambassadors whose voices and content already resonated with their desired audiences to spread the word about entering the contest.

Step 2: Rethink what wellness looks like
Instead of grooming an existing Nerf employee to become their TikTok ambassador, Nerf democratized the process of selecting their new Chief TikTok Officer by finding someone their broad audience already found relatable.

Nerf likely isn’t the first brand you think of when you think about wellbeing, but Nerf’s new Chief TikTok Officer, Sophie Tomlinson of nerfers101 put it nicely: “I will take a grumpy relative who usually doesn’t smile at family gatherings, hand them a blaster and see the inner child come out of them,” Jamison said. “At the end of the day, I feel like we don’t have a lot of fun in our lives.”

Step 3: Leverage real influence
This is where the brilliance of this campaign really comes alive. Instead of hiring a celebrity or only using influencers to promote the Nerf brand on TikTok, Nerf gave one influencer an official title and allowed that person to take over content creation on the brand’s account. This not only guaranteed an increased audience on a channel that was new to Nerf—their winner’s account has 1.8 million followers—but it meant engagement from all of the 1,000 applicants who shared their videos on the social media platform, and all their followers.

Plus, the applicants were generally Nerf enthusiasts already. The brand wasn’t trying to engage influencers who were solely in it for the pay cheque (though the $$ amount wasn’t child’s play). They were looking for superfans who needed little brand education and whose audiences were likely already fans as well.

Step 4: Offline is the new online
Obviously, the point of this campaign was to build awareness and engagement online, but in its essence, Nerf is selling products to play with offline. On-camera or off doesn’t matter. They want consumers to engage on TikTok, buy the products they see and use them at home…possibly to create even more content.

Step 5: Own your conversation
Instead of simply creating their own branded content, Nerf flipped the switch on this campaign and collaborated with a content creator who was already a conversation-leader about Nerf. After all, why would Nerf try to create their own content when there are creators out there whose content is already on-target? By partnering in this way, Nerf gains input and oversight into their CTTO’s content, and vice-versa. In this Nerf war, everybody wins!

Our diagnosis: An open call for a superfan with a major following on the very platform the brand wanted to grow is just Brilliant. Nerf may stand for “Non-Expanding Recreational Foam” but clearly, the brand knows a thing or two about expanding their “target” audience.

Posted on: May 11th, 2021 by Felicity Team
Gucci and Nerf rethink what wellness looks like
Are you ghosting your consumers?

As we look ahead with cautious optimism, consumers expect brands to play a role in enhancing wellbeing.

So what’s your brand doing? If you are taking action to contribute to wellbeing, do the right people know about it?

Fill in your details below to be emailed our checklist to make sure your wellbeing story will resonate with – and motivate – your audiences.