Interview with an Influencer: Barry Waite on "selfie culture," influencer power, and educating PR pros of the future

Interview with an Influencer: Barry Waite on "selfie culture," influencer power, and educating PR pros of the future 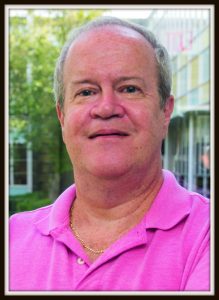 I’m pleased to present our inaugural “Interview with an Influencer” column featuring a public relations leader and educator whom I greatly admire. I met Barry Waite during his tenure at Toronto-based PR agency, Strategic Objectives. He joined the firm in 1986 as a production coordinator, and worked his way up to Senior Vice President. Barry is currently Academic Chair, Communications & Media in the School of Communications, Media & Design at Toronto’s Centennial College. He assumed the role of chair in September 2014 after successfully leading the college’s award-winning public relations graduate certificate program for more than four years. He was also the lead developer for the college’s new Bachelor of Public Relations Management program, which launched in September 2014. Barry is involved with some fascinating research over at Centennial, about which you may read in his answers below. Want to learn more? You can follow Barry on Twitter (@Toronto_PR_Guy) and LinkedIn.

Q: What are you working on right now that you are excited to share?

At the Story Arts Centre at Centennial College we’re always looking at trends in storytelling–what’s shaping how we tell them, who’s telling them and just as importantly, who’s listening. I’m very excited about new research we’re finalizing at our kidsmediacentre focused on how tweens, teens and young adults (primarily Gen Z and Millennials) are using social media to brand themselves.

It follows on our study last year called “Hashtag Instafame” that took a deep, sometimes disturbing, look at the “selife culture” and what kids are doing on social media. Our new research, to be released later this month, looks at the shift from content producer to influencer.  We’re particularly interested in how marketers are helping create celebrity tweens and teens who are happily monetizing themselves and selling products online. In some cases we’ve found children as young as five with their own YouTube channels. Our kidsmediacentre Director, Debbie Gordon, calls after-school video production “the new arts & crafts.”

Q: What cultural shifts are taking place today that we need to pay attention to as communications professionals?

I think there is a seismic shift underway in how we create and consume media. In the past month we’ve seen a number of legacy media companies making drastic cuts to their print newspapers as they struggle to exist in a business model that’s changing. In fact, newspapers like The Toronto Star are much more than a newspaper these days, just as CBC is more than a broadcaster.  PR professionals have to navigate this new reality, particularly around the growth in content marketing and native advertising that is making “pay for play” the new reality. It think it challenges the credibility of public relations as well as the traditional role media play.

Here at Centennial College, we’re working to ensure our programs like Journalism, Public Relations and Publishing reflect this new reality. As an example, we’re training journalists to shoot and edit video on iPads as well as teaching them entrepreneurial skills they’ll need to succeed when they graduate.

Q: In your opinion, what makes someone influential?

That’s a good question and relates to what we’re looking at through our research at the kidsmediacentre. What exactly is influence and can a 13-year-old be influential? Maybe if they have a million followers on Instagram. My current thinking is that we need to look at different types of influencers. As an example, there’s no doubt that Kim Kardashian is influential with a certain audience. But what about Bernie Sanders? He’s about as different from a Kardashian as you can get, yet is inspiring a new generation of Millennial voters in the United States. In today’s connected world, I think influence should be focused on your ability to inspire change, not sell things. Here is an example of someone local who’s become extremely influential. Since penning a cover story for Toronto Life on his experience with carding, Desmond Cole has pushed the issue to the top of the public agenda.

Q: What piece of advice do you wish you had earlier in your career?

Don’t be so afraid of making mistakes. It’s the only way we learn.

Q: What skills will distinguish good leaders from great leaders in the future?

The ability to make time for those around them and to truly listen to them. Time is becoming a precious commodity as our attention spans hover around those of goldfish. Everyone, particularly leaders, need to stop talking and listen more.

Q: What are your strategies for productivity and time management in your work and personal life?

As I noted, time is a precious commodity. I’m increasingly aware of the amount of time email takes, and am working to implement some strategies around managing my Inbox. For me, that’s my number one challenge. One strategy is to use Stephen Covey’s “Four Quadrant” module that classifies tasks into Urgent and Not Urgent, and Important and Not Important. It’s helping me not be so reactive to email. Plus I’m scheduling “work time” so I don’t end up in meetings from 9 to 5 with no quality time to devote to the work that needs to get done every day. I’m also getting out and speaking to our students more; it helps me remember who the most important person we serve is. As for my personal life, I’m working on it!

Posted on: February 16th, 2016 by Amy Laski
What do a knuckleballer and an entrepreneur have in common?
Being practical about productivity