I think social media influencers get a bad rap. Yes, I’m an influencer marketing professional, but I started my career as a journalist. And, if anyone is going to be skeptical of influencers, it’s journalists. When I went to school there were strict church-and-state guidelines around advertising and editorial. Many big media outlets didn’t even accept free product from PR companies, let alone accept payment for content. (And this wasn’t even that long ago. I graduated University in 2003.)

Now, popular blogs are perceived as media outlets and social media stars have become celebrities, their reviews of products—whether paid for or not—can mean big ROI for brands. Instagrammers can be considered micro influencers with as few as 1,000 followers and those with hundreds of thousands or millions of followers can charge upwards of $1,500 per Instagram post (some influencers make $20-$40k per post!).

So what is a social media influencer? It’s a person who has an engaged following or audience on social media. Instagram is the place to be these days, but you can be a YouTube, Twitter or Facebook influencer, too. “Influence” isn’t all about raw numbers. Engagement rates are important. The rate is based on the number of likes and comments a user gets compared with the number of followers or the impressions a post has. 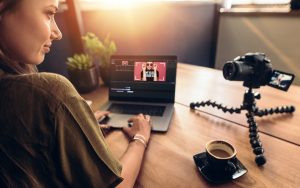 With the evolution of traditional media, popular influencers provide the access to audiences advertisers are looking for.

Of course, there had to be a backlash. It really blew up in January when blogger Elle Darby sent an email to a hotel in Ireland asking for a free stay. The hotel owner posted a snarky response (without sharing her name) to Facebook and the world watched and then questioned the validity of influencers. They buy followers! Who are they to ask for free stuff? Why are they paid so much?

We can scoff, write influencers off as phonies and call for brands to invest in thought leaders, instead or we can get with the times. Influencers are creating an industry of their own and I think they deserve respect. Here’s why:

Experts estimate that by 2020, almost 50 per cent of the Canadian population will be self-employed. And that’s what influencers are. Their social media feeds are like businesses, growing from the ground up. Their products and services are Instagram posts, IGTV shows and YouTube videos.

And guess what? Just like not all businesses are reputable, not all influencers are reputable. Some buy followers and pay for bots to engage for them. Luckily, Instagram’s new algorithm was designed to weed out fake followers and marketers are more educated on how to tell if an influencer’s audience is real (hint: look at their engagement rates).

The good ones are really good. Their followers are engaged and dedicated, their posts creative and their sponsored posts are genuine and well curated (they don’t take every sponsorship thrown their way).

They are basically branding experts

Popular Instagrammers are geniuses when it comes to branding themselves and their lifestyles. Their Instagram feeds are consistent in theme, colour and message. Their blogs are beautiful and fun to read. Like a great logo, you see your favourite influencers social media handle and immediately you can picture their signature look and can probably explain to a friend what they’re about—fitness mom, fashion blogger with a monochrome obsession, vegan beauty blogger. How many small companies can boast that kind of brand recognition?

They understand how to engage

Influencers know how to engage with their followers and with whom to engage. They are often experts on social media network algorithms and know how to use them to their advantage. But it’s not all business. The best influencers create a community feeling with their followers. They know who they are and keep up with others’ feeds and stories so that their comments are genuine and knowledgeable. There are real relationships formed on social media and those relationships drive traffic.

Finally, they work their butts off

Skeptics probably picture influencers flitting around town with fat wallets, taking selfies. And while taking photos and videos is a big part of being an influencer, the ones I know spend countless hours liking, commenting and creating content each day. They ferry themselves (and sometimes their kids) to marketing and PR events, documenting every step of way. They create media kits and correspond with sponsors, sign contracts and fulfill the requirements of the contracts they have.

These are real businesses, albeit those that allow influencers to work from home—or wherever they like. And isn’t that the point of technology? To make our lives more convenient, to allow us flexibility? Question the validity of influencers if you like, but I think they’re changing the future of marketing and content creation. And hey, how much do you make each time you post to social media?

Posted on: August 30th, 2018 by Vanessa Grant
Media Literacy: A checklist to discern fake news
What ‘Above the Fold’ Means in 2018 and Beyond: Felicity PR featured in The Citizen Newsletter from Cision Canada