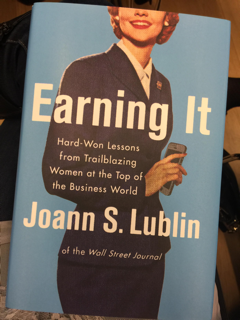 It’s not every day that a true trailblazer is in our midst. That’s why, when I heard that Pulitzer Prize winner and The Wall Street Journal Management News Editor Joann S. Lublin would be speaking as part of the Rotman Women and Leadership series, I jumped at the chance to learn from her. She shared not only her experiences, but also those of the more than 50 women she interviewed for her book ““Earning It: Hard-Won Lessons from Trailblazing Women at the Top of the Business World” (Harper Business, 2016).

Lublin shared some poignant and humorous anecdotes of her own, including how, early in her career, upon joining a male-dominated, pinup-calendar-clad workplace she prominently displayed a male pinup calendar of her own. I have to be grateful that while I’m certain that gender stereotypes do exist in today’s workplace, we have come a long way since those days! I also enjoyed hearing how she and her husband decided to balance out each other’s rising careers by alternating geographic relocations. For example, she had an opportunity in one city, so they moved their family to seize it, then he got an opportunity in another location so they moved for him and so on.

Lublin structured her talk with four reasons why — or rather how — the women featured in the book become business leaders:

“You have to learn from your failures to avoid making the same mistake twice.” (Click to tweet)

I enjoyed Lublin’s sharp wit and keen observations tremendously, and dove right in to her book that continues in the same voice. One thing I would have liked Lublin to explore is women — and men, for that matter — who have stepped off the traditional career ladder and have built for themselves a successful life. Surely their stories would exude as much, if not more, character learnings than those who have scaled Fortune 500 companies. Different, yet hard-earned trails blazed to the top, whatever that “top” may be.

Posted on: April 10th, 2017 by Amy Laski
The best gift is being present
Managing a crisis in social media is a spectator sport