Interview with an Influencer: Jamie Campbell on building a career out of his love of baseball

Interview with an Influencer: Jamie Campbell on building a career out of his love of baseball 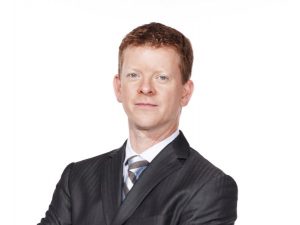 With 162 games in the regular season, Jamie Campbell is busier than ever these days.  As a broadcaster for the Toronto Blue Jays, he is knee-deep in all things baseball.  On game day, long before the first pitch is thrown, Jamie is refreshing himself on the sport – getting ‘informed’ as he would say. He speaks with players during batting practice, familiarizes himself with any new stats and scores and checks out Twitter and other online channels for the latest news. He then records the ‘headlines’– quick voiceovers of what’s coming up and the only pre-taped content for the game. Everything else he does is live and unscripted. For many, the mere thought of having millions watch and listen while you’re talking unscripted might sound horrifying. For Jamie, it’s what he loves.

A graduate of the Radio & Television Arts program at Ryerson, Jamie says he always knew what he wanted to do when he grew up. He used to sit in the stands of Exhibition Stadium as a 10-year-old, waiting anxiously for the likes of Doug Ault, Lyman Bostock and Bob Bailor to sign his baseball cards.

Jamie has had a long and exciting career in the sports broadcasting world, working his way up to the position he holds today: Host of the Sportsnet pre-game show Blue Jays Central alongside former Blue Jays catcher, Gregg Zaun. 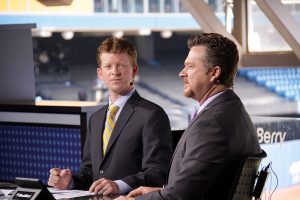 Even in the ‘off season’ Jamie lives and breathes sports. In 2010, he was selected as the play-by-play announcer for freestyle skiing and snowboarding events at the Vancouver Olympics where he called Canada’s first gold medal on home soil, won by Alex Bilodeau in the men’s moguls. At the 2012 Summer Olympic Games in London, he did the play-by-play for all cycling events, both road and track.

Last year, the Blue Jays were AL East Champions for the first time since 1993. This year, Jays fans are hungry for more. For this instalment of “Interview with an Influencer” we sat down with Jamie Campbell to talk shop.

What’s the one book or blog that’s had the most impact on your professional life? Why was this particular book/blog so influential to you?

I don’t think there is a book or blog that exists in that respect. However, my professional life is based on my love of baseball, and two people are responsible for introducing me to the game. One is my father—who took me to my first game in 1977. The other is a former player named Lyman Bostock. He was playing for the Minnesota Twins at the time, and he took me aside before a game in Toronto and expressed a sincere interest in who I was. I was only 10 at the time and his gesture made me feel like I was welcome in the world of big league baseball. Bostock was murdered a year later. His death crushed me.

Name the top three qualities that make someone inspirational as a leader or an influencer? Explain why you chose each one.

A good orator is essential—if you can’t talk, you won’t be able to lead.

Clarity and strength of mind and opinion—for obvious reasons.

Experience—inspire me because you’ve been there.

What’s the one piece of advice you wish you’d had earlier in your career? Why?

Be patient. Good things take time to evolve. I expected too much too soon when I was young.

What should we be questioning or challenging in the world today?

There needs to be a greater shift toward protecting the earth environmentally. As a father, I can’t help but wonder what our own children will be facing in the next 15-20 years. We seem to be fairly committed in Canada, but there are other areas of the world that pay no mind.

Name the top three things you would put inside your time capsule, if you built it today. Explain the significance of each.

A photograph of my family with a description of each person, so whoever opened the capsule would know who were the most important people in my life. A copy of the latest Globe and Mail newspaper or Maclean’s magazine showing what was happening ‘way back when.’  A box of Cream of Wheat—it’s been a favourite of mine since I was a kid.

What skills do you believe will distinguish good leaders from great leaders in the future? What are you personally doing to hone these skills today?

I don’t think I can really answer this question. I don’t “lead” anyone. I simply try to be exceptional at my job, offer intrigue and credibility to the role, and have a positive influence on as many people as I can.

If you could be truly excellent at only one thing, what would it be?